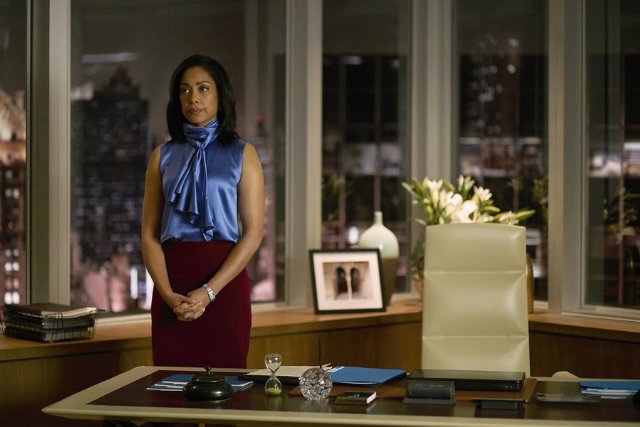 Episode 9 was deeply rooted in pride and consequently, the summer finale was biblical, driven by flashbacks, self-fulfilling prophecies, and gravitas.For some, one of the drawbacks of this episode may be its over reliance on flashbacks. However, in my opinion, it was one of the strengths. The episode may have lacked some thrust – considering the plot only lasted a few hours, but it did not lack any intensity or substance.At the start, Soloff calls an emergency meeting to oust Jessica as managing partner of Person Specter Litt. It is unclear whether he actually does this begrudgingly due to Hardman’s blackmail or genuinely. Either way it may not really matter after Jessica’s threat to fire him regardless in the last episode. Perhaps that was misguided.

However the threat of the impending vote that may not go in Jessica’s way actually gives the show an opportunity to show how much the firm actually means to Jessica – and how much she has personally invested in it. With a flashback. It seems her commitment to the firm was actually a cause for her divorce (when she literally brought work home by considering the idea of young Harvey living in with her). Effectively, her work life is her personal life, and she is about to lose it. This is a rare moment when we actually see Jessica fearful. In typical Suits fashion, she violently sweeps her desk – but this in fact wasn’t the truest representation of her character. Rather the best moment was two seconds earlier during a little tete-a-tete with Louis.

For a brief moment, Jessica believes she may have enough people on her side to win the vote, until Louis comes in with bad news. Hardman and his unlimited funds (through Forsman) threatens to take over Louis’s sisters company unless he votes otherwise. As Donna notes, if it was anyone else Louis would not have cared, but this was his sister, his only sibling, his family. He had to vote against. And in Jessica’s most nuanced moment of acting, she expressed poise, tears disappointment and a rare understanding for Louis, and perhaps one of the sweetest lines of the show. “No matter how this turns out, Pearson would always consider Litt her partner”. This was perhaps Jessica’s most telling moment in the entire show. And Louis’s too perhaps – because his internal conflict shows how much he cares for the firm. Regarding both characters, it was a perfect episode.

Last episode, Harvey was faced with a decision, quit or get Jessica ousted. So he runs to his therapist. That’s where he spends most of this episode – combined with flashbacks of him discovering his mother cheating. This episode manages to find some beautifully convoluted connection between Harvey’s fears from that incident and the current proceedings to grant his character some deeper nuance. And somehow it works. In him eventually telling his father, he splits up his family to his younger brothers detriment and he feels he was not strong enough and that’s why he told his father. Essentially, he lay down so he lost, and he is afraid of doing the same thing here. If he lays down for Forsman, it may seem like the right thing to do, but he will lose out. This in fact defines Harvey so completely – it explains his stoic emotionlessness and arrogance. Obviously, as the therapist points out, his logic is flawed, and he eventually steps down in order to save Jessica.

And now on to Mike.

Mike may have seemed prideful in the last episode but it seems in truth he was actually conflicted about the burden of his secret. That deep set conflict perhaps now became clear after his run-ins with his ex-girlfriend and Trevor in the last two episodes. In this episode he goes to see a priest who is established, through another series of flashbacks, as someone who took it upon himself to guide Mike upon the loss of his parents. His scenes are particularly emotional – how he lost all discipline and faith due to their deaths but nonetheless the priest and his grandmother still protected him and loved him against his preferences. He visits the priest because he is afraid that Rachel will leave him if he quits and no longer is the glorious lawyer he once was. I guess perhaps it is a legitimate fear, but the priest convinces him to have faith in Rachel – to believe that she will always be there because she loves him, like the priest and his grandmother was for him (and, perhaps an unspoken connection, like God is for all of us). So consequently, Mike returns and quits his job.

And then, as he leaves, he gets arrested for fraud.

(and I couldn’t be happier)

This raises lots of questions about how the show will proceed. Who told on him? What happens next? Could they just give us lots of options but no concrete answer a la Sherlock? Or will they pull in some underwhelmingly random character with an apparent grudge from first season a la The Mentalist? And what does Mike’s future hold? How will it affect his old cases? And all Pearson Specter Litt other cases? And clientele? And reputation? And will Jessica, Harvey, and Louis be seen as complicit and jointly liable? And what about hottie-hot-hot-hacker-babe that gave him his fake forged certificate in back in Season 1? And how will Rachel survive? And the firm? Could this be some ploy by Hardman to get rid of his opposition within the firm in one fell swoop and pick up the scraps? Could this be what he was ‘blackmailing’ Soloff with and he was simply trying to protect the firm from ruination by actually helping Hardman? But then how could Hardman possibly have found out? And why didn’t Soloff just come to Jessica for help? Or could it be Rachel’s mum who found out and did this because she suspects Mike has Rachel in his fist? But then what of Robert Zane? So much speculation! So much speculation! And we have 5 months before Suits returns!!!

However, two things can be said with utmost certainty. This episode and last episode worked as a one two punch delivering the best of the show as a whole ever – the previous episode with its relentless intensity and this one with its structured deconstruction of its core characters. It’s reliance on flashbacks was a necessary good, and whatever the episode may be said to have lost in urgency, it more than gained in gravity. And secondly… I haven’t been this invested in the show in a long time.

This brings us to a break in season 5, find out when Suits will be returning.