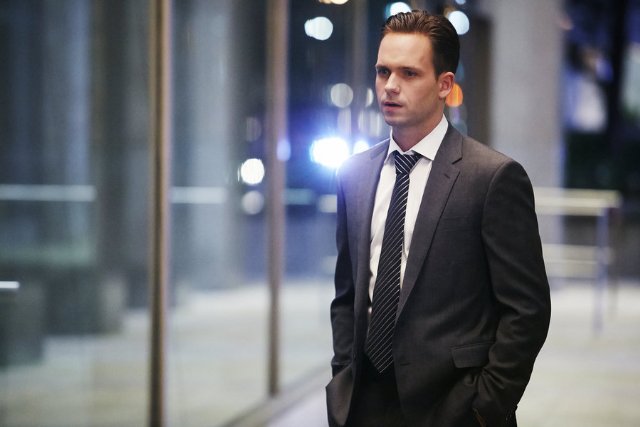 But before we discuss that, let’s talk about Harvey. Remember how calm episode 6 was in his absence. In contrast, this episode is tense because of him. He negatively affects everyone in the episode. Donna is put in a tough position between Louis and him. Mike is used as a bait. In fact, the fact that Mike’s secret is out again could be traced back to Harvey. Jessica’s authority is undermined. And Louis is inconsolable. All because of Harvey.

However Harvey makes a sincere apology to Louis and it looks as if he gets away with it again until it turns out that Louis is playing him to get him suspended for months. And in fact we do feel that that may be the best thing for the firm. Obviously, being Louis, at Donna’s impetus, he changes his mind again when it’s too late – the night before the vote to suspend Harvey is to be made.

It is quite an interesting complex developing. Harvey needs to be punished and humbled, even if that humbling is self-inflicted. In fact Soloff, in one of his most genuine moments, tells Harvey this point blank. And as an audience, we don’t mind seeing that happening. But we do not want the relationships in the firm to be broken beyond repair. And Harvey and Louis are in a very bad place now. Furthermore we are seeing how Jessica is truly a flawed maternal figure for both Louis and Harvey – with her favouritism reaching extremes. Ultimately we need Harvey to be brought down a peg or two, but not so much that he topples over everyone around him.

Mike decides to use Rachel as his associate on his first case but she ends up doing all the work because the opposing counsel happens to be Mike’s ex girlfriend who would know his secret if she finds out he works there. Obviously she finds out. Ultimately, Mikes secret has become a trope we’re kinda tired of now. Like Superman and Kryptonite. Like a bug buzzing in your ear. It’s something that nothing can be done about, so it’s very irritating… usually. But not here. Because of the hard truths. The ex-girlfriend explains to Mike the people he is actually damaging with his secret, most importantly Rachel (who has an intense scene begging the ex not to report Mike to the DA). The truth is that Mike, in maintaining his secret, is selfish and self-serving. This needed to be pointed out to him and now it has. It will be interesting to see where they go from here now.

Soloff too has an intense scene, although it is a bit ambiguous. It seems Hardman may be blackmailing him to work against the firms interests. No details has been given, but he smashes shit up, so at least the gravity has been established. In that, the scene was successful – I am curious.