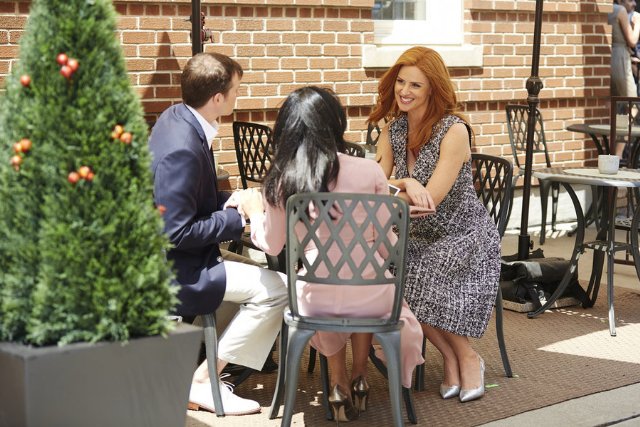 There was not much tense drama in this episode. There wasn’t much Harvey either. Are the two equivalent?
However, in the absence of drama, most of the characters had very relaxed very comic moments that still made this episode particularly enjoyable. Louis, with his usual lack of social guile, indulges in a bit of Japanese cultural appropriation in order to close a client which, if not for his genuineness, would have been a poor move. However, it worked. I suspect this is the closest you may ever get to a political statement from Suits. It was not particularly overt, and if it was so that would have been brash, on the nose, and undermine the comedy of the scene. It was a perfectly pitched scene, which was Classic Louis, and classically funny.
Donna, being Donna, takes charge of getting Mike and Rachel the most prestigious venue for their wedding. It seems she may have bitten off more than she can chew though – which Gretchen notices. This is their first scene together and it’s nice to see their battle of wits and mutual respect, but Donna’s best has to be when she puts on a French accent to convince the couple who booked the venue to change their booking. It’s bold. It’s brazen. It’s Donna.
The notable thing is how in both scenes, as with most of the episode, Harvey is conspicuously absent. This is perhaps the first step in Suits crafting Harvey’s fall. So far we’ve seen Harvey broken. Now we’re seeing Harvey as unneeded. It will be interesting to see where this leads.
Harvey does feature in this episode though. The episode actually opens with a flashback to where he, as a kid, catches his cheating mother, perhaps just driving home the point that Harvey’s familial troubles may be the centre of his psychological ones. This was a point reached at the end of the last episode.
However, his current case actually sees his therapist coming in as a witness to testify against an ‘innocent’ man with information that would otherwise have been privileged. In order to undermine his testimony, he betrays her trust by using a part of her backstory she told him in confidence. It’s sad. It’s tense. It’s Harvey.
As usual, a simple charming apology gets him back in her good graces. This is so typical it is actually annoying. Personally, I’m tired of seeing Harvey talk his way out of every thing. It may be just me, but I’m actually keen to see his fall. And that may be the best success of the season thus far. He has undeserved privileges. He has Jessica’s unwavering bias. And he comes with such a burden that although we do sympathise with him and his psychological troubles, we almost implore his professional demise.