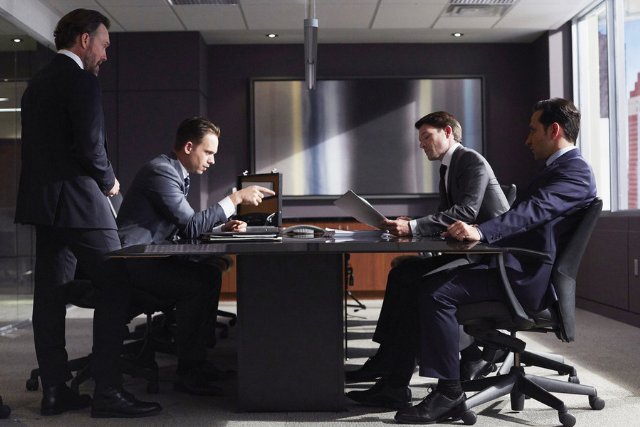 And this is perhaps where the final tumble of Harvey begins. At the end of this episode, Harvey and Louis engage in a bit of fisticuffs. Perhaps that is an understatement. Harvey gives him a black eye and uses him to smash a coffee table, without Louis even being able to land a shove. And the episode makes it clear that although Harvey is the one standing at the end of the fight, this is simultaneously a professional and personal fall. This is one thing Harvey can’t get away with. Jessica cannot support him. And Louis is now (violently) estranged not because he did some “underhanded shit”, but because Harvey can’t respect him and keep his junk in his pants.The most poignant point in this episode however were the parallels drawn between Harvey and his mother, especially with his relationship with Louis and Donna. Obviously Donna knows Harvey slept with Louis’s sister against his wishes, and Harvey, against her wishes forces her to keep it secret. The same way young Harvey knew his mum cheated on his dad and forced him to keep it secret. The therapist points out this parallel which Harvey vehemently denies. Unfortunately he doesn’t realise until it is too late. Hopefully he won’t be able to just apologise his way out of this one the way he did with the therapist in the previous episode.

On the other side of the office, Mike and Soloff work together, and they actually make a good team, although a unique one where they manipulate each other to get the best out of each other. In fact it works so well that Mike gets recommended for junior partner – a promotion which he obviously cannot take?

Soloff somehow has actually managed to become a fairly likeable person, although it has now been made known that he is under Hardman’s wing. However the truth is not so clear. He once was cohorts with Hardman but wishes to be no more. But as we all know now, it is not so easy to cut yourself off from Hardman. Perhaps Soloff is not really the prime antagonist in this episode. It seems he may just be a drawbridge which Hardman can use to invade the castle. This makes him a little bit more sympathetic. And seeing how well he gets along with Mike even more so. Furthermore, it seems his recommendation was genuine. It’s a shame Mike can’t take the promotion.