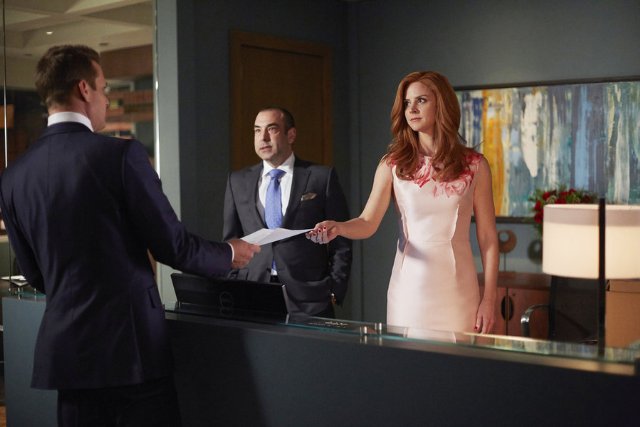 The first notable comment about this episode as a whole is that it seems too hermetically sealed. Fine, it is established quickly that Harvey has panic attacks – good. But it is established and resolved all too quickly. He both has the beginnings of the problem and the beginnings of its resolution in the first episode. There are hints of further plot developments to come, but as always, Suits seems to be rushing its character development again. However, the opener was good. Rarely is Suits a show that one could describe as visually ambitious – it does have its rare moments – and the season 5 opener of Harvey’s nightmare was one of them.

Towards the end of the last season, the general consensus may have been that Suits seems to be running out of ideas. Here, however, the show seems to have pulled one more cat out of a bag that’s rapidly running empty. This season aims to explore Harvey more, as he crumbles without the support-structure that is Donna by his side (and at Louis’ side instead) . I cannot help but perhaps draw parallels between this and my anticipation for the upcoming season of House of Cards whose main protagonist also just lost his partner in life and crime.

The best-executed moment of this episode is easily Harvey’s main confrontation with Donna. It is sumptuously intelligent and more layered than lasagne. Harvey is being childish in the way he treats Donna. In fact she more or less says so. She offers to give him a transitionary two-week grace period and he rudely scoffs at the idea. But the tone and dialogue of this scene is so perfectly pitched. Underlying his disregard and anger, and underlying his petulance, is a hint of the familial issues that have been elucidated in previous seasons – particularly his childhood being adversely affected by his cheating mother and the split of his parents. For Harvey, at least in this scene, the bonds that hold his team together is more than a mere employment contract, it is more than even mere loyalty, it is stronger than even marriage. It is a bond that he needs to never be broken, so as not to repeat his broken childhood. Like Harvey says, “As far as [he is] concerned, two adults who care about each other don’t move on at all”. It is deep and profound, which makes it even more aggravating that the show seems to be rushing the ensuing character development.

However, the notable thing about this cat is that it is Harvey-centric. Although its ramifications stretch to Louis and Donna too – which perhaps suggests that in the long-run Louis’ deep-set self-esteem issues may be confronted, it abjectly leaves Mike out. His story is now somewhat relegated to a B-plot and continues the trend becoming less professional and more romantic. In fact it verges upon soap-operatic. We only get a mere moment with him and Rachel, but that moment is more than enough to show where his plot will focus – his engagement and impending marriage with Rachel. As with any profession-focussed show, I guess sometimes indulging in the private lives of the characters is inevitable, perhaps beneficial. In fact when the wider professional ramifications of personal troubles are explored any show could verge on brilliant. For evidence, one could refer back to previous seasons of Suits or the aforementioned House of Cards. But when personal lives are explored for their sake and their sake alone, which Mike’s plot seems to be now, it detracts from the show. I mean, the show is still called Suits, not Wedding Planner’s Diaries, right?

In conclusion, the season premiere is halfway promising – promising us Harvey like we have never seen him before and a more confident deconstruction of who are now the three most interesting characters. And the other half unfortunately continues in the same soap-operatic trend of the previous few seasons concerning itself with Mike’s romantic endeavours. It is sad that what was Suits’ greatest strength at the start (Mike’s character arch) has now evolved to be perhaps its greatest weakness. Hopefully the ensuing episodes will give Mike’s B-plot just as little runtime as it was given in this episode.