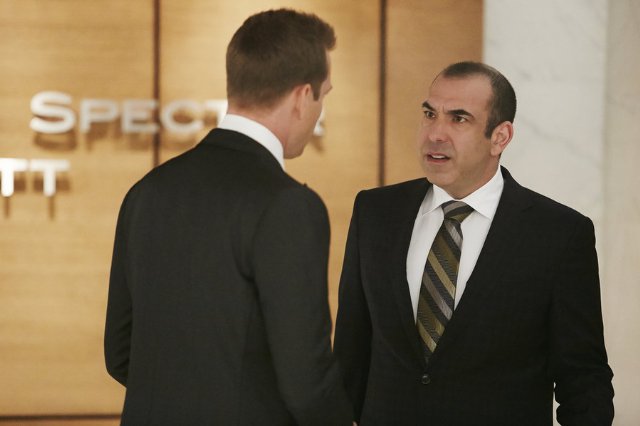 Fortunately, Mike’s B-plot does not get much screentime in this episode. Hope his wedding plans are going well – I don’t really care about them.

Who I care about is Harvey. It is obvious from the start that he is taking out his Donna-frustrations on Louis (and Jessica pointedly points it out), and what makes this even more painful is that it happens whilst Louis is at his butt-kissing best. Louis tries to butter up Harvey and in turn, Harvey slaps him right in the face. Consequently, Louis sides with our newcomer partner , Jack Soloff, in a war against Harvey. Obviously, as always, Louis and Harvey reconcile, but unfortunately, not before Louis can put a stop to the first steps of the plan to ruin Harvey. Harvey and Louis fit together like two imperfect puzzle pieces – Harvey is always angry with Louis when he is at his best, and happy with him when he is at his worst, and because Louis’ self-valuation is so reliant on what Harvey thinks of him, it is easy to sympathise with both characters.

New Suits recruit John Pyper-Ferguson as new character Jack Soloff is formidably good. He is well-dressed, immaculately bearded, with a slight touch of an intriguing sophisticated accent that almost makes him simultaneously reminiscent of both Edward Darby and Daniel Hardman. This, combined with his innate unflappability makes him seem to have the potential to be one of the best antagonists the show has had. In his assault on Harvey, his first point of attack seems to be Harvey’s wallet, and with Louis’ help, he manages to land the blow. We would have to wait till next episode to see how much it hurts.

Unlike the last episode, which seemed very character driven, this episode has started pushing the major players into play. We have established Harvey as our wounded hero, Soloff as the main antagonist, Louis as the inexplicable pawn, and Donna (or Harvey’s sanity – they are almost one and the same) as the prize. It has been hinted numerous times how Soloff’s affront on Harvey may indirectly put her at risk. Perhaps this would evolve into something more significant later on, but for now, the season plot has started to take shape, and so far it looks good.

Well, on the B-plot front, it seems like Mike’s wedding plans are not going so well. He has now set himself the insurmountable task of impressing Rachel’s father and this further aggravates the problem noted in the previous episode review. With profession-focussed shows (a la House of Cards, Homeland, Mad Men etc), it is great when personal lives are used to accentuate professional plots or highlight aspects of a character that would otherwise remain hidden if illuminated only by a professional light. But when the profession is now used as a tool for the development of personal lives as an end in themselves – where the personal lives have become the central focus over the professional – the show has lost the plot.