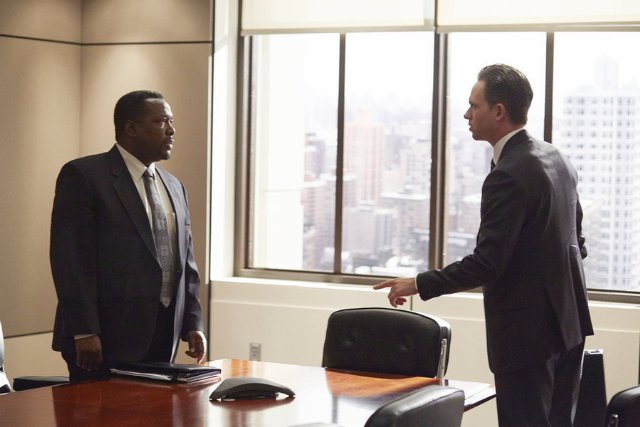 Let’s talk about Mike. To be fair, that was the A-side this week.

To recap… Mike is working on a charitable human-interest case with Robert Zane in order to get to know him better and vice versa. In essence, he is trying to get his future father-in-law’s truest approval. It sounds like an incredibly soap-operatic plot – and it has been so far… up until this episode. Robert Zane accepts a menial settlement which will in turn raise the stock price of another Zane client. This raises all sorts of concerns for Mike – does Robert not care for his clients; is Robert lazy; is Robert unethical and criminal; can Robert be trusted. As a result, he takes his concerns to Jessica (in what I must note is perhaps the rudest and most disrespectful way possible – they have a shouting match) and it is seen that not only has his altruistic character trait still not been resolved yet, but also he is at first unwilling to give Robert the same benefit of doubt that was given to him (when it was first discovered that he was a fraud).

It is already clear how much better this plot arch has become. It is complex and character driven. We find out more about the tri-partite relationship between Jessica, Mike, and Robert (and by extension Rachel). It is not about driving a personal story – it still remains unclear if Mike truly has Robert’s approval as their relationship has not really changed massively. It is about fleshing out aspects of characters that haven’t been done so far. Unfortunately, this was a little stunted by how convoluted the case became and how quickly its facts were skirted over. However the important points were clear: Robert is not unethical, criminal, lazy, or uncaring, Mike now understands that he can trust Robert and give him the benefit of the doubt, and Robert may be beginning to understand that he can do the same for Mike.

Therefore, in that regard, this plot arch was actually pleasing this week.

On Harvey’s side of the office, we had some equally interesting developments. First and foremost, we get to meet Louis’s sister (Esther) and she’s HOT. And nothing like Louis at all. Obviously Harvey can’t keep his hands off her, both before and after he finds out she is Louis’s sister. Esther uses Louis to get Harvey to represent her in her divorce proceedings. Her husband claims they had a verbal contract promising him 50% of her company in lieu of him going to Stanford Medical. She is willing to go so far as to perjure herself to ensure this doesn’t happen. Harvey deftly removes any possibility of that. It transpires that the husband did give up his time to take care of the children and family whist Esther focused solely on her business. However it is clear by the end that this is simply an analogy of Harvey’s divorce with Donna – Donna being the party that has given up all the time and Harvey being the opaque, insensitive, and hurt Esther. So obviously through this case he realises he needs to reconcile with Donna, and he does so. It is the usual Suits formula and it works alright here.

There is a slight twist to the formula this time though – Louis’s insecurities. He believes Harvey is trying to screw (over) his sister to get to him. However Harvey is actually trying to do right by Esther to bury the hatchet with Louis. Eventually, with Donna’s help, Louis sees the light. The difference this brings is subtle and important – it is the first time Louis’s deep-set insecurities are being challenged and tackled. He delivers an emotive monologue close to the end demonstrating that they in fact go all the way back to his childhood. Hopefully, the emancipation of Louis Litt will not end in this episode and we will continue to see him unfurl and evolve.

In conclusion, aside from a few smatterings of positive character development, particularly with Louis and Mike, this was all in all a rather pedestrian (and slightly convoluted) episode. Nonetheless, one can still see a positive trend forming.