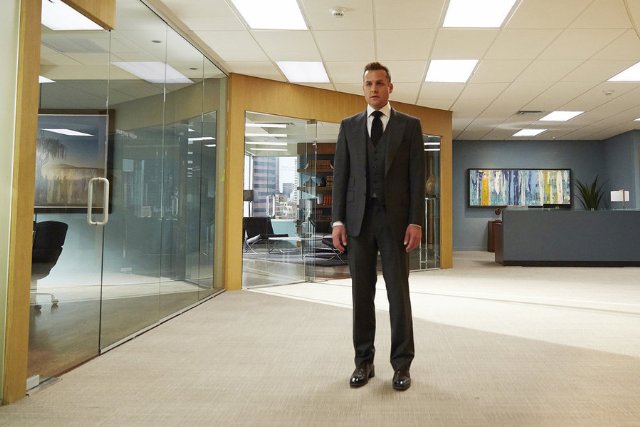 It is quite clear now that this season aims to tackling theme of ambition. Harvey is a character so defined by ambition it is almost eponymous. But so is Louis Litt, and also the new introduction, Jack Soloff, who is perhaps a more formidable threat. The core difference between Louis and Harvey though, as noted by Harvey in one of his more vehement moments, is the fact that Louis’s ambition is driven by a deep-set dissatisfaction with himself and who he is, which Harvey somewhat (obviously) misinterprets as greed. This often leads him to act without scruples. And perhaps these scrupleless moments of indiscretion further aggravate Louis’s deteriorating self esteem. It is an interesting complexity, which has been explored before, but never as adeptly or tragically as done so in this episode.

Louis does not get much screentime here, but the few seconds he does get are perhaps the most crucial. He is unable to detatch himself from Jack Soloff’s plans against Harvey. Then in the final scene – at night where Louis is working alone in his office – Harvey walks up and makes his usual poignant threat. But Louis’s silent response is neither his characteristic sobbing ‘that his friend doesn’t like him anymore’, nor his now equally characteristic loud vehemence of ‘standing up for himself’ when put down by Harvey. Rather his expression, although one of slight confusion, is mostly calm and resolute. Because he now knows where he lies. He is unsure of whether his relationship with Harvey can ever be repaired. He knows he cannot detatch himself from Soloff. Both his scruplelesness and Harvey’s opinion of him have resulted in his self-esteem being at an all time low. It is tragic. And the fact that he reacts only with silence, as if he has completely given up now, accentuates this.

Again this episode showcases a newfound cinematic flair. It is not flawless, but it is refreshing to see some visual ambition in the show. This is best exemplified by Harvey’s roleplaying scene with his therapist (who attempts to get to the bottom of his Donna-troubles by impersonating her). Reluctantly and unexpectedly Harvey pours out his aggression on her, and the pacing of the scene is brilliant. Perhaps it became a little bit too obvious and on-the-nose actually turning the therapist into Donna – it was already clear beforehand – but the narrative ambition there must be applauded.

And on the B-side, Mike uses his eidetic memory (almost forgot he still had that) and a little bit of flair to impress the judge of the case he is working on with Robert Zane and get their case moving in the right direction. But obviously, the real ‘judge’ is Robert. Perhaps I am being too harsh (this is the third review straight in which I have berated this B-plot) but consider the question – Why is Mike doing all this? This entire plot is moving towards Mike winning Robert’s truest and most complete approval. Thus, it is not because Mike actually has the ‘compassion’ he claims to have for the penniless plaintiffs he represents. That professional flaw and intriguing (albeit overplayed) character trait has been brutally sacrificed for a soap-operatic personal arch. It needs an eulogy.